« Back to News & Notices

On April 6th, 2021, members of Ward IV elected a new Councilman, Amanda Koren.  Ms. Koren hails from the great State of Georgia, but in 2016, after her husband Michael’s retirement from the military, they chose to make Waynesville their home. 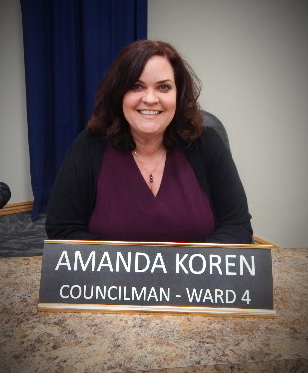 Having served on the Waynesville Park Board, Ms. Koren has been an active member of the community for several years. She has volunteered with the Chamber of Commerce and has participated in the Chamber’s Route 66 Challenge for many years.

With a focus on hard work, transparency, support of her Ward members and the greater community, Ms. Koren brings a fresh outlook and an enthusiastic approach to her new role as a City leader.  She has been selected to serve on the Finance and Human Resources Committee and the Roads and Grounds Committee.  With these appointments, we are very excited to work with her and to have her as a part of Waynesville’s team!